The weirdest traffic jams ever

Nobody likes being stuck in traffic. Whether it’s a never-ending queue at temporary traffic lights or a mile-long motorway tailback, getting caught in a traffic jam can easily disrupt your day.

But when you finally get to the front of the queue, the reason for it might not always be what you expected. Besides collisions, roadworks and bad weather, what else could be causing the hold-up?

We’ve found some of the strangest and most surprising reasons for traffic jams.

Drivers on the M74 in South Lanarkshire reported a hairy near-miss after a sheepdog rode a tractor onto a busy stretch of the motorway.

It’s reported the dog was riding in the passenger seat with his owner. While the owner was busy tending to his livestock, Don jumped into the driver’s seat, leant on the controls and tore across the road before hitting the central reservation.

Fortunately, no animals or humans were harmed during the adventure.

One busy weekday evening, the M6 came to a standstill. The reason? A damaged transport tanker spilled almost 32,000 litres of concentrated gin across the tarmac.

The road had to be closed across two junctions, causing traffic chaos. If only the lorry had built-in booze control.

Rush hour traffic once ground to a halt along the A34 after roadwork contractors reportedly ran out of tarmac.

Resurfacing work was supposed to be completed at night with minimal disruption. Unfortunately, engineers didn’t have enough of the black stuff to finish the work, leaving one lane out of action for an extra day and tailbacks for over eight miles.

Easter holiday getaways were delayed after a swan flew onto the M6 and took a rest break in the outside lane.

The stubborn swan could not be moved for more than an hour as vehicles were forced out of the lane, causing huge delays.

The swan eventually flew away unharmed, but no doubt it ruffled a few drivers’ feathers.

A giant inflatable Santa broke free from its mooring in Wisbech, Cambridgeshire, rolling onto the nearby B198.

The huge Santa decoration reportedly flew away from the front garden of a neighbouring home. It blocked the road for the best part of the afternoon, causing hold-ups in both directions.

Lured in by a free giveaway of the sweet treats, drivers queued for up to an hour to get into Hermiston Gait Retail Park, causing gridlock on roads into the city.

The traffic jam that never was

Perhaps the strangest cause of a traffic jam on our list is one that involves no cars at all.

An artist in Berlin set out to demonstrate he could influence the data used by map services like Google Maps.

Walking a cart of 99 smartphones through the streets of the city, Simon Weckert gave the impression of slow-moving traffic on near-empty roads. The result? Well, the streets turned from green to red on Google Maps, causing real-life traffic to be redirected along alternative routes to avoid the phantom jam. 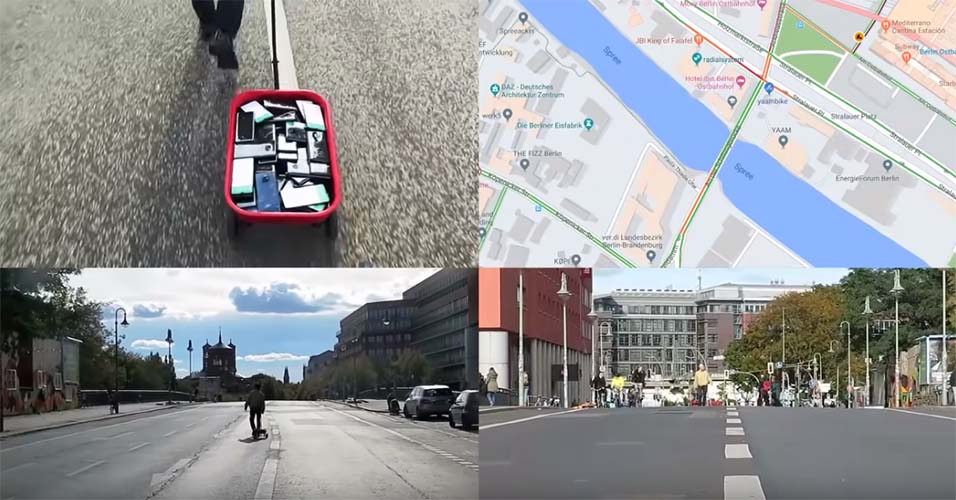 Regardless of the cause of traffic, if you follow the guidance of road signs and practice these stress-busting tips, you might find it easier to stay relaxed and safe on the road.

Five common road rules you may not be sure about

How to keep stress at bay while driving