It’s no secret that younger drivers are more likely to be involved in road accidents, compared to other age groups.

As a result, it’s common for parents to worry every time their child gets behind the wheel.

However, there are an increasing number of technological solutions and gadgets that claim to help keep your child safer on the roads. Here’s a rundown of some of the latest developments.

Some car manufacturers have developed technology to restrict the way that cars are used – providing some peace of mind if you’re worried about how your newly-qualified teenager drives your car.

Among these is MyKey, which is available on some Ford models. This safety feature allows you to set restrictions for when others drive your car. These include a maximum speed limit, limiting the volume on the speaker system, and even a reminder chime every 30 seconds until the vehicle’s front occupants put on their seatbelts - the audio system is also muted until they do so.

Some Chevrolet drivers can also impose similar restrictions. For example, its in-built ‘teen driver technology’ system, allows parents to set speed alerts, limit volumes on the car radio, and even get a ‘report card’ detailing how they drove.

Only time will tell if such technology will become widespread, or what impact it will have on road safety for young drivers.

There’s an app for that

Texting while driving is a big problem on UK roads. In fact, in 2017 the government introduced much harsher penalties for drivers caught using their phone while behind the wheel.

But, as well as reminding your kids about the dangers to themselves and others – and the risk of losing their licence should they be caught using their phone while driving – there are technological solutions, too.

Apps such as SafeDrive and AutoDrive can block drivers from being able to text while behind the wheel. Some apps can block all keyboard functions, while others will autoreply to texts to inform the sender that you’re driving and will get back to them later.

Talk to them about a tracker

Another option is to fit the vehicle with a GPS tracker, like Teen Track, which allows you to see exactly where the car is in real time, and lets you know what speeds it has been travelling at. You can print out reports and then discuss the results with your child.

This type of tech isn’t for everyone and it’s important to discuss it with your child before fitting it.

A less confrontational approach is offered by Lightfoot in the form of a gadget that plugs directly into your car’s engine and simply sits on the dashboard. Through lights and audio, it offers constant feedback on how efficiently you’re driving.

After each journey, you then get a score out of 100 based on how often the lights on the Lightfoot gadget were green during the drive.

Drivers can win prizes based on how consistently they score well. In addition, the device claims to help users save money on fuel.

Whether or not you agree that tech should be used to control how people drive, this is already happening. New rules agreed by the European Commission mean that all cars sold in Europe will need to be fitted with speed limiters from 2022.

While these systems don’t automatically apply the brakes, they do limit engine power, meaning you shouldn’t be able to go over the speed limit unless you override the system, which you can do by pushing hard on the accelerator. You’ll then receive a warning if you continue to drive above the speed limit for more than a few seconds.

The Department for Transport has confirmed this tech will be mandatory in the UK, regardless of Brexit, so you can expect to see it in new cars within a few years.

As well as considering the latest tech, it’s important to stick to the basics, too. So, set a good example for your child when you’re behind the wheel.

If they see you sticking to the speed limits, signalling properly and keeping any mobile devices out of sight, they’re more likely to do so themselves and to develop good habits for life.

Go to our road safety hub on Solved to find out more about how to stay safe behind the wheel.

10 tips for parents of new drivers 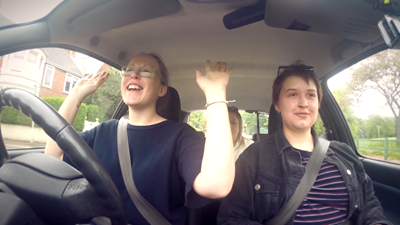 Drive of your Life