It’s official: you’re more likely to speed at night-time and the weekend

Drivers are more likely to exceed the speed limit at the weekend, at night-time and on roads where the limit is 30mph, new government statistics suggest.

While 46% of cars exceeded the speed limit on motorways in Britain last year, and 10% on 60mph roads, more than half (52%) did so on 30mph roads, according to the latest government figures, which are based on cars driving in ‘free-flowing’ conditions.

The statistics also reveal differences in speeding behaviour depending on when people are on the road.

Time of day seems to make a difference too. Drivers are most likely to exceed the speed limit in the early hours of the morning, when roads are much quieter. 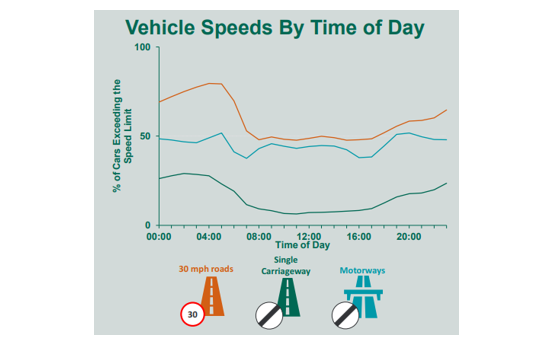 Why do people speed?

The RAC Report on Motoring 2018 asked drivers why they speed. The top reason was “I drive according to the speed of other road users”, which was given by 41% of motorway users and 27% of 30mph road users. On 20mph roads, users most often cited the speed limit being inappropriate as the contributor to their exceeding the speed limit (31%).

Other reasons given by drivers for speeding included not looking at the speedometer enough, feeling pressure from other drivers behind and feeling it’s safe to go faster than the speed limit.

Whatever type of road you’re driving on, here are some simple tips to avoid speeding:

Go to Solved to read more about road safety.

How to teach young kids about road safety

Speeding: how much time do you really save?