Can you imagine if in the future there were no road signs? Instead, all the information you needed would be beamed into your car and displayed on your dashboard.

While a widespread cull of road signs might be some time off, in-car technology is to be trialled that could at least lead to some of the huge overhead motorway gantries being taken down.

Highways England, which manages over 4,300 miles of motorways and A roads, plans to run the trial on part of the A2 and M2 between London and Dover later this year.

Information such as speed limits, which would traditionally be shown on roadside signs, will be displayed to drivers on screens inside their vehicles. It is intended that the trial, which will cost up to £15m and only involved specially equipped test vehicles, will increase safety, as well as potentially doing away with some signage.

Similarly, Highways England said another trial will beam warnings of approaching roadworks onto screens inside cars. It says this would allow drivers to change lanes in advance of the works to improve traffic flow.

It comes as part of a wider project to enable vehicles and related road infrastructure to communicate data on roads in the UK, the Netherlands, Belgium, and France.

Mike Wilson, safety, engineering and standards executive director at Highways England, said: "Having the technology in place to allow vehicles to connect to each other and the road around them has the potential to improve journeys, making them safer and more reliable by providing real-time, personalised information directly to the driver. It could also help us manage traffic and respond to incidents.”

Road safety charity Brake said it supported the potential of new technology to improve road safety, but cautioned about the unintended consequences it could have. “The introduction of such a system must not increase driver distraction,” said Joshua Harris, director of campaigns at Brake. He added: “It must be fail-safe and consideration must also be given to ensuring that all road users can access critical road information, such as variable speed limits, equally – not all cars and motorbikes have the capacity for such information.”

While the Highways England trial, if judged successful, could eventually result in fewer road signs, elsewhere trials of technology to improve road safety are actually introducing more signs. Use your mobile while driving on some roads in Norfolk and a road sign will activate as you pass, giving a flashing visual message to prompt you to stop using your phone. 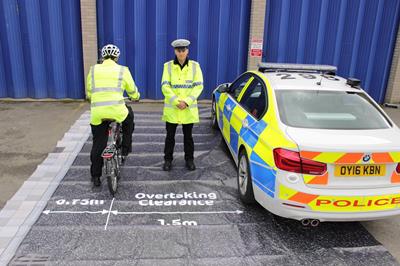