Everything you need to know about car tax

Car tax has been subject to significant changes over the last couple of years.

All vehicles registered in the UK are subject to the tax, whether they are being driven or kept off-road. But the amount of tax you need to pay will vary significantly depending on the model of your car, as well as when the car was first registered. Some vehicles qualify for exemptions but owners have to apply for these.

What is a car’s registration date?

The registration date for your car is the date it was first allocated to an owner in the UK. It doesn’t change as the car moves between owners. You’ll be able to find it on your car’s V5C registration document.

Any vehicle registered after 1st March 2001 and before 1st April 2017 is subject to the old car tax rules. All cars were placed in a lettered band, based on their carbon dioxide emission levels.

These rates increase each year by the retail price index (RPI) measurement of inflation.

From the second year onwards however, all vehicles have a flat rate of £140, no matter what the emission levels are like.

Here’s a full run-down of how the various tax bands look: 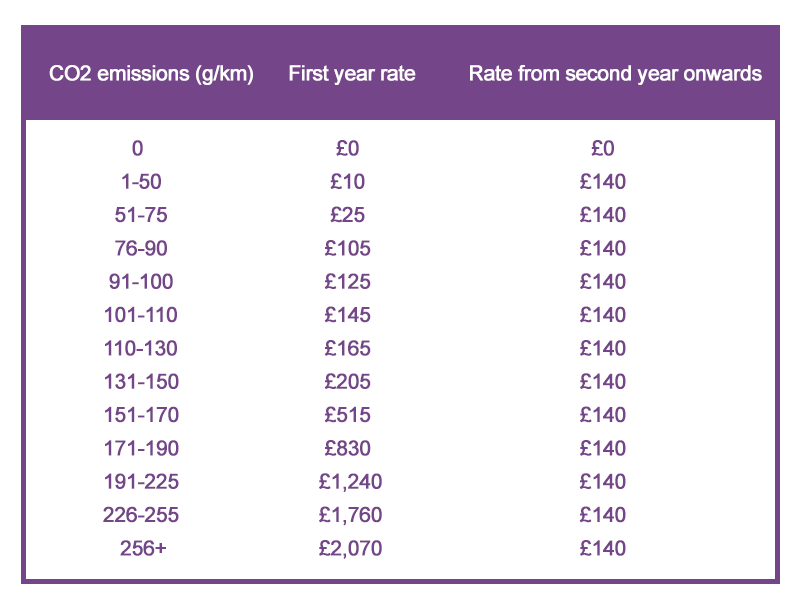 There’s an additional cost to bear in mind if you have an expensive car. If the car costs more than £40,000, then you will have to pay an extra £310 charge each year for the first five years of ownership.

Diesel vehicles are subject to another change from this year. If you buy a new diesel car which does not comply with the Real Driving Emissions Act 2 standard of testing then you will pay a higher car tax for the first year of ownership.

What this means in reality is that if you drive a diesel, you’ll likely be moved up a tax band. So if your vehicle falls within the 101-110g/km band, but doesn’t comply with the new standards, then you will pay £165 in the first year rather than £145.

It’s not just vehicles with zero emissions that you don’t have to pay car tax on. ‘Historic vehicles’ - which are classed as those that are 40 years or older - are also exempt, while there’s no tax to pay on vehicles used by a disabled person (either as a driver or passenger) either.

What happens to the car tax when I sell the car?

Car tax doesn’t move with the car when it’s sold. If you’re selling your car, you can claim a refund for any full months that are left. This should be issued automatically when you return the relevant documents to the DVLA after the sale.

If you are buying a new car, you will need to ensure that you have the car tax sorted before you drive it.

How do I pay for my car tax?

You can tax a car for either six or 12 months. If your tax is due to expire, you should receive a reminder that it’s nearly time to sort out your tax for another year.

There are a number of different ways that you can arrange your car tax. For example you can go to a Post Office, call the DVLA or do it all online through the official gov.uk website.

10 tips for parents of new drivers

How to maximise your fuel efficiency