Passing the driving test is only the beginning for motorists; getting to ditch the L plates doesn’t mean that you are suddenly a perfect driver.

Many of us continue to make all sorts of daft mistakes at the wheel, and some can be particularly serious.

One of the most common mistakes motorists make doesn’t actually take place behind the wheel. Research from comparison site CompareTheMarket last year suggested that as many as 1.5 million drivers have incorrect information on their driving licence, such as an old address.

This is potentially a very costly oversight - if the DVLA finds out, you could be hit with a £1,000 fine.

Thankfully, if you do need to update your licence details you can do so online, and best of all it doesn’t cost a penny.

According to figures from the Department for Transport, the number of motorists who break the speed limit has fallen in recent years. Its figures for 2016 revealed that around 46% of cars exceeded the speed limit on motorways, while only 8% of vehicles break the rules on single carriageways.

Motorists are more likely to push their luck in 30mph zones though, with 53% of vehicles going faster than they should, while in 20mph zones a massive 81% of cars exceeded the speed limit.

And it won’t save you that much time either. Driving continuously at 80mph instead of 70mph would save you only five minutes at best.

Speed limits are in place for a reason. Breaking them is not only dangerous but could also bring with it fines and penalty points on your licence.

Increasing numbers of drivers admit to using their phone while driving. Research from the RAC found that motorists who confessed to calls or texting jumped from 8% in 2014 to 31% in 2016.

Last year the government introduced stricter penalties for motorists caught using their mobile while behind the wheel - you now face a £200 fine and six points.

It would be a mistake to think that mobile phones are the only things motorists allow themselves to be distracted by though. These include things like fiddling with in-car technology like a SatNav, eating and drinking, or even just thinking about what’s going on in your life rather than giving the road your full attention.

All of these distractions can cause motorists to make mistakes and potentially lead to accidents.

More than 8,000 people were killed or injured in accidents involving drivers who had been drinking in 2014, the most recent set of figures from the Department for Transport show. That’s a significant reduction from the recent peak of more than 20,000 in 2002, but it’s still far too many.

Having any alcohol in your system can impair your reaction times, making it more likely that you will be involved in an accident. The penalties are heavy if you are caught too, ranging from large fines and driving bans to time in jail.

Tiredness can also significantly dent your driving abilities, from slowing your reaction times to causing silly mistakes like forgetting to check your mirrors when changing lanes.

The Royal Society for the Prevention of Accidents (RoSPA) suggested in a 2017 report that tiredness is a factor in as many as 20% of road accidents and a quarter of serious accidents.

Failing to get your eyes tested

Since 2012, the DVLA has revoked 42,519 car and motorcycle licences because of drivers’ poor vision.

It encourages drivers to regularly carry out the ‘number plate test’, where they check if they can read a number plate from 20 metres away and arrange an eye test when necessary.

A study by the AA last year found that a quarter of drivers don’t bother to check the pressure in their tyres on a regular basis. In fact, one in ten said they had never done so.

Uneven tyre pressure can cause all sorts of problems, such as fuel inefficiency and an increased risk of punctures. It can also cause your motor to fail its MOT.

For more information on road safety, and guidance on staying safe behind the wheel, go to our Solved hub.

Speeding: how much time do you really save?

Five common road rules you may not be sure about 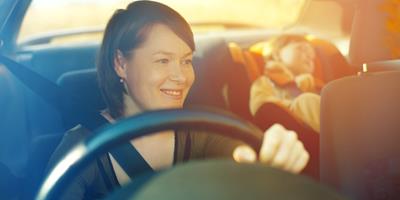