“I’m pleased to report income growth across our core lines of business – Motor, Home and Commercial, largely driven by pricing action taken in the first quarter, as well as new home and commercial broker deals launched this year.

“Market conditions are difficult to predict. Motor rates continue to increase and Household rates are being discounted despite long-term weather impact. But we remain prudent in our approach to pricing and continue to put in place actions to ensure we can remain competitive including investing in pricing technologies and resources.

“We continued to deliver a profitable result which takes into account our investment in innovation, including the launch of our digital proposition Back Me Up, and the impact of the flash floods and storms in June, and weather-related claims in the first quarter.

“Inflationary pressure remains on third party damage and accidental damage average costs. We’re clearly seeing the benefit of our cloud-based portal in partnership with Aviva allowing us to manage these claims more cost effectively and efficiently.  But more needs to be done to tackle third party cost and we support the need for actions including limiting the time for whiplash claims to a year and further regulating Claims Management Companies and Medical Reporting Organisations.”

Ageas is focused on the needs of the customer, while committed to delivering profitable returns through a clear and consistent multi-distribution strategy with brokers, partners and through its direct brands.

Ageas has reported a UK net profit of GBP 43.0 million, down on the same period last year (9M 2015: GBP 46.9 million). This reflects the weather related claims in the first six months of the year compared with benign weather in the same period of 2015, as well as costs linked to innovation investment. The net profit also includes Ageas’s 50.1% share of the net result of Tesco Underwriting, the Motor and Home insurance partnership with Tesco Bank, which increased to GBP 7.0 million (9M 2015: GBP 5.0 million).

Despite the run-off of an MGA scheme, Commercial and Special Risks GWP increased to GBP 139.2 million(9M 2015: GBP 133.9 million) due to the broker deal with Arista, which launched with Ageas earlier this year. 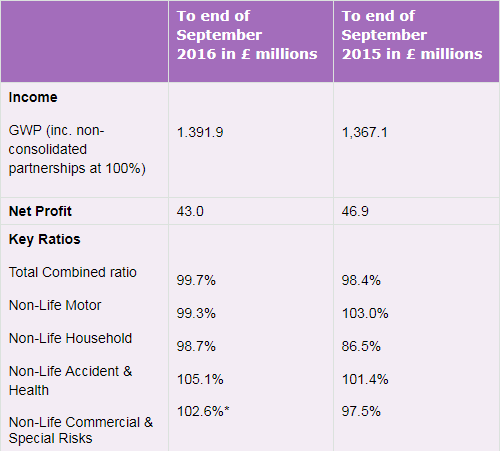