“We’ve made good progress during the first three months of 2016 and I’m pleased to report GWP and profit are both up compared to this time last year. Much of this performance can be attributed to our Personal Motor book, where positive rating actions ahead of a hardening market have resulted in volume growth.  Further increasing our market share, we now insure 3.9 million Personal Motor customers in the UK.

“Continuing our commitment to the broker market, we’ve had a successful first quarter in terms of new schemes in both Household and Commercial lines, where we’ve announced new strategic partnerships with Towergate and Arista, and with Darwin Clayton.

“Looking to the partnerships channel, focus remains on driving profitable growth through our existing partners and in particular the development of the proposition with Age UK, having agreed to extend the contract for a further 10 years from 2016. Our direct brands, Rias and Castle Cover, continue to develop new initiatives to compete in challenging household market conditions, but are starting to see volume growth in Motor as a result of increased market pricing.”

As a result of integration within the UK business, from 2016 Ageas is presenting its UK results on a consolidated basis and has realigned some minor products from Other lines into both Motor and Household.  The results previously reported separately within Non-Life and Other Insurance segments will now be reported as Non-Life on a combined basis.  The 2015 comparative figures have been restated accordingly.

Ageas UK is focused on delivering profitable returns through a clear and consistent multi-distribution strategy with brokers, partners and through its direct brands. The combination of high quality service and low-cost delivery remains a strategic priority for Ageas in the UK.

Ageas covers over 7 million customers across its business in the UK including 3.9 million Personal Motor customers.

Ageas UK reported a year-on-year increase in net profit to GBP 19.0 million (3M 2015: GBP 12.0 million) as a result of the improved performance of the Motor book in the first quarter. The result also includes Ageas’s 50.1% share of the net result of Tesco Underwriting, the Motor and Home insurance partnership with Tesco Bank, which was stable at GBP 1.6 million (3M 2015: GBP 1.5 million).

The combined ratio of Tesco Underwriting improved to 98.7% (vs. 104.6%), as a result of lower personal injury and accident claims in Motor in the first quarter of 2016.

Commercial and Special Risks inflows increased to GBP 42.1 million (3M 2015: GBP 40.4 million). In line with the company’s strategy to grow its Commercial book distributed through brokers.  The first quarter saw two new strategic broker partnerships announced, one with Towergate and Arista as part of a 5 year capacity arrangement, and the other with established broker Darwin Clayton to provide a small business product. 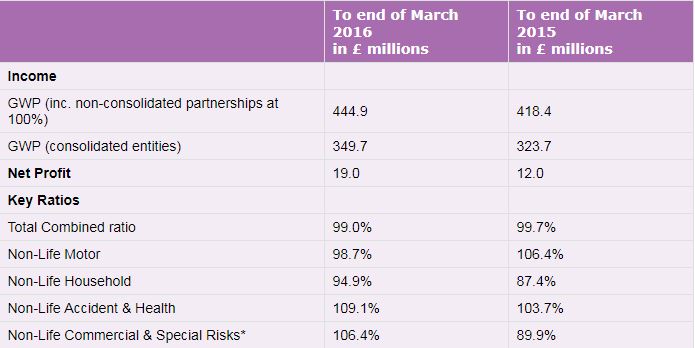