“Reflecting on 2015, underlying profit was in a good place, but just as our customers were not immune from the storms and floods at the end of the year, neither were we. The estimated impact of the December severe weather was significant, but in line with our market share. Income was down slightly year-on-year where we’ve taken deliberate pricing action against competitive market conditions. Following an upward trend in Motor prices across the market seen towards the end of the year, we’ve increased the number of motor policies we insure to 3.8 million. The home market remains very competitive, but rates are showing signs of going up and we will monitor the impact in response to the weather events. The true premium increases are obscured by the IPT change.

“We secured some new and extended some existing partnerships in 2015, further evidence that we are a preferred partner of choice for brokers and affinity brands. Our long-standing reputation for excellent customer service was also further evidenced by being named Which? recommended provider for Car and Home insurance for our RIAS brand at the end of the year.”

As a result of the sale of Ageas’s life protection business at the end of 2014, all historic data, including the GBP 16.7 million capital gain resulting from the sale, has been restated accordingly to allow a like-for-like comparison. In 2014 Ageas Protect reported inflows of GBP 110.9 million and a post-tax loss of GBP 2.4 million.

Ageas UK is focused on delivering profitable returns through a clear and consistent multi-distribution strategy with brokers, partners and through its direct brands. The combination of high quality service and low-cost delivery remains a strategic priority for the Ageas UK businesses.

In 2015 Ageas UK reported a net profit of GBP 21.4 million (12M 2014: GBP 80.4 million). The impact from the severe weather events at the end of the year as a result of Storm Desmond, Storm Eva and Storm Frank is estimated at £46.1 million and is in line with market share. The 2014 result included a previously reported one off benefit from a legal settlement and the underlying result for the same period was GBP 61.7 million.

Total income, including Tesco Underwriting, was GBP 1,930.1 million (12M 2014: GBP 1,986.7 million), reflecting the impact of Ageas’s continued disciplined approach to pricing in a market where Motor premiums were falling for the first part of the year, but are now showing an upward trend, and where Household average market premiums continue to be low.

Ageas has around 7 million customers across its businesses in the UK and now insures 3.8 million Motor policies. A new strategic partnership with Virgin Money was launched in October and the long-term partnership with Age UK was further extended by 10 years.

In response to the Solvency II regulation, Ageas’s partial internal model for Ageas Insurance and Tesco Underwriting was approved by the regulators.

The total Commercial and Special Risks combined ratio improved year-on-year to 103.3% (12M 2014: 110.3%) reflecting the improvement in performance in the Commercial lines business, as well as lower costs related to the integration of the Groupama and Ageas insurance businesses which has now been completed. As an industry like-for-like comparison, Ageas’s Commercial lines ratio, including Commercial Motor, significantly improved to 92.3% (12M 2014: 99.3%).

Tesco Underwriting, the Motor and Home insurance partnership with Tesco Bank, of which 50.1 per cent is owned by Ageas, generated GWP of GBP 400.6 million during the period (12M 2014: GBP 428.9 million). Lower new business volumes and average premiums were seen across both Motor and Household as a result of the continued competitive market conditions.

Within Ageas UK’s Other activities, the Retail business delivered a net profit of GBP 6.7 million (12M 2014: GBP 12.8 million). Total Other business reported a net loss of GBP 3.5 million (12M 2014: profit of GBP 23.1 million) reflecting strategic costs and stable regional headquarter costs. The 2014 result included a benefit of £22.8 million from a legal settlement and a partnership arrangement.

Total inflows were GBP 146.9 million (12M 2014: GBP 164.7 million) against the backdrop of competitive Motor and Household market conditions where volumes in large Personal lines intermediaries are under pressure.

As part of Ageas’s Retail strategy to respond to these market conditions, actions continue to be taken to simplify the business model. One of the key deliveries has been a move from six customer systems to one, as well as a move to one telephony platform. 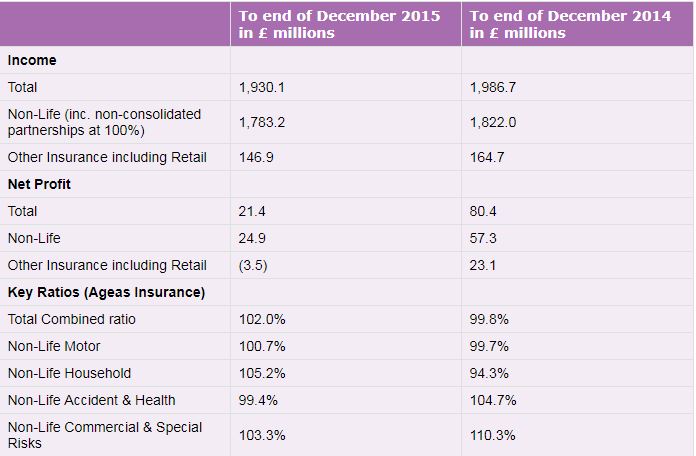 *Commercial and Special Risks includes costs of integration. Commercial lines including Commercial Motor reported a total combined ratio of 92.3% (vs. 99.3% in 2014).