Announcing the results for the first quarter of 2015, Andy Watson, Chief Executive of Ageas UK commented:

“It’s been a profitable but challenging first quarter, with competitive conditions continuing in both the Home and Motor markets as a result of low premiums. In Commercial lines however we’ve seen a good performance where we’re further evolving our proposition for open market, digital trading and schemes business. At the same time we’re continuing the integration of our two insurance businesses, which is scheduled for completion by the end of the year, and are progressing with our new Ageas Retail strategy. Investment in our Partnerships business continues to deliver success with two new deals secured with Virgin Money and Volkswagen Financial Services.

Our commitment to delivering excellent customer service continues to receive significant industry recognition evidencing our desire to do the right thing for our customers.”

Commenting on the Ageas Group announcement today that former Ageas UK CEO Barry Smith has decided to retire from his position as Chief Operating Officer at the end of September 2015, Andy Watson said: “I would like to take this opportunity to thank Barry for building a fantastic UK business.  As evidenced by his ‘Life Time Achievement’ Award at the British Insurance Awards last year, his leadership and legacy is respected and recognised across the industry. We very much look forward to his continued contribution to the business as an Ageas UK Board member.”

As a result of the sale of Ageas’s life protection business, Ageas Protect, to AIG at the end of 2014,
all historic data has been restated accordingly to allow a like for like comparison.

Ageas UK is focussed on delivering profitable returns, reflecting a clear and consistent multi-distribution strategy and partnership approach with brokers, affinities, intermediaries and through its own Retail business. The combination of high quality service and low cost delivery remains a strategic priority for the Ageas UK businesses.

Ageas has around 8 million customers across its businesses in the UK and insures 3.6 million Motor policies. The company’s focus on partnerships continued to perform well, with new deals announced with Virgin Money and Volkswagen Financial Services in the first quarter, as well as progressing new and existing broker deals, demonstrating the trust that significant brands place in Ageas to meet their customers’ needs.

Evidencing its commitment to delivering high levels of customer service and best practice performance, Ageas has been shortlisted for 15 awards so far this year for its end to end customer experience, with wins already picked up at the Modern Claims Awards. Ageas has also retained its top customer satisfaction rating for Home Insurance achieving a score of 91.9 out of 100. The Institute of Customer Service (ICS) first awarded the company its ServiceMark Accreditation for Home insurance in 2013, with Motor and Travel offerings following suit a year later.

Ageas Insurance’s net result was GBP 12.6 million (3M 2014: loss of GBP 4.0 million) reflecting an improved performance on Household following relatively benign weather in the first quarter, as well as growth in Other lines including Commercial.

Motor (Private Car and Commercial Vehicle) income was GBP 190.3 million (3M 2014: GBP 209.1 million), where Ageas has continued with targeted rate increases against a market where premiums are down 2% over the last quarter of 2014, but slightly up year on year .

Household income was down at GBP 78.8 million (3M 2014: GBP 87.0 million), due to competitive market conditions where premiums are down year on year by 8% for contents insurance, 3% for buildings insurance and 2% for combined policies .

Commercial and Special Risks inflows saw an increase of 6.4% to GBP 43.8 million (3M 2014: GBP 41.2 million) as a result of growth in Commercial scheme business. The company’s refreshed focus on growing business in Commercial Motor, schemes business and digital trading will continue to evolve in 2015, building on Ageas’s position in the SME market.

The combined ratio for Ageas Insurance continued to deliver a sub 100% performance and by the end of the first quarter was 99.4% (vs. 106.1% 3M 2014). The Motor ratio deteriorated to 103.6% (3M 2014: 101.6%) as a result of a higher frequency of accident claims linked to increased traffic volumes combined with third party damage average costs. Targeted pricing action continues to be taken to correct this. Benign weather contributed to a good performance of the Household ratio at 93.4% (3M 2014: 111.8%). As the business continues to improve the performance of the Commercial book, the total Commercial lines ratio including Commercial Motor also delivered a sub 100% performance at 82.1% (3M 2014: 113.7%).

In March Ageas Insurance was assigned an A+ ‘Strong’ rating by Fitch, reflecting the company’s strategic importance to Ageas Group as the organisation’s largest company by Non-Life premiums and aligning Ageas Insurance with other ‘core’ operating entities.

Tesco Underwriting, the Motor and Household insurance partnership with Tesco Bank, of which 50.1 per cent is owned by Ageas, generated GWP of GBP 94.8 million during the period (3M 2014: GBP 108.9 million). Competitive market conditions led to lower new business volumes across both Motor and Household in the first quarter.

The net result of Ageas’s interest in Tesco Underwriting made a profit of GBP 1.5 million (3M 2014: loss of GBP 4.2 million) with favourable weather conditions year on year.

The Retail business delivered a net profit of GBP 1.3 million (3M 2014: GBP 2.1 million), including project costs relating to the Retail strategy that was launched last year.

As part of the new Retail strategy to build on its position as the UK’s fourth largest Personal lines intermediary and to respond to the continued challenges of a competitive market, actions have been taken to simplify the business model and build long term growth. This strategy will continue to evolve in 2015 under the leadership of Ant Middle, who was appointed as CEO Ageas Retail, subject to regulatory approval, from April.

Already in the first quarter, new strategic partnerships have been announced with Virgin Money and Volkswagen Financial Services (UK) Ltd. 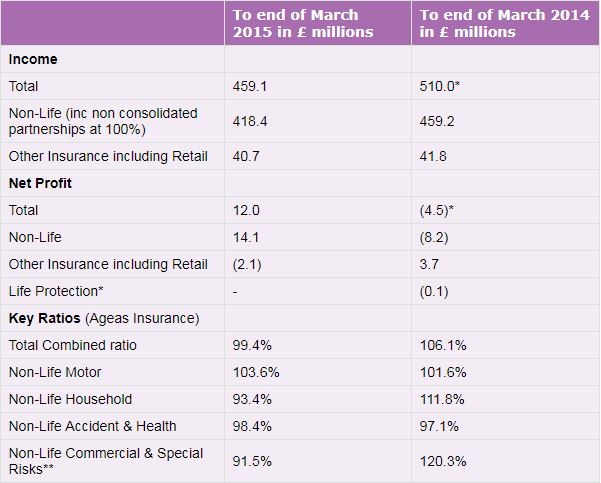 * Sale of Ageas Protect to AIG completed in December 2014.Total 2014 figures restated for a like for like comparison.
** Commercial and Special Risks includes costs of integration. Commercial lines including Commercial Motor reported a total combined ratio of 82.1% (vs. 113.7% in 2014).