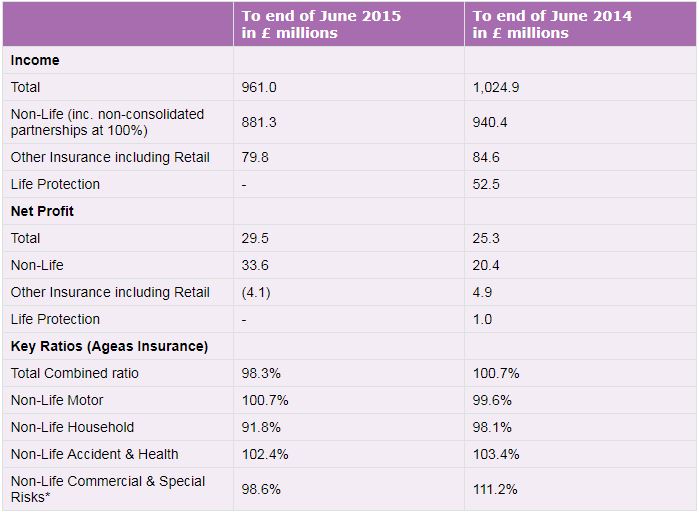 * Commercial and Special Risks includes costs of integration. Commercial lines including Commercial Motor reported a total Combined ratio of 84.7% (vs. 101.3% in 2014)

“As we’ve progressed through the first half of 2015, we’ve continued to deliver a profitable performance largely driven by the positive impact from the benign weather in the first quarter as well as our improved Commercial lines result linked to our disciplined approach.

“Competitive conditions have continued in both the Home and Motor markets as a result of low average market premiums. It’s pleasing to see a much needed upward trend in Motor prices over the last quarter, a trend that is long overdue.

“During the first half of the year we have continued to run two very major change programmes. Within our insurance business, we are nearing completion of our integration programme. And within Ageas Retail, we continue to focus on our strategy of simplification and are making good progress with this”.

As a result of the sale of Ageas’s life protection business, Ageas Protect, to AIG at the end of 2014, all historic data has been restated accordingly to allow a like for like comparison. During the first half of 2014 Ageas Protect reported inflows of GBP 52.5 million and a post tax result of GBP 1.0 million.

Ageas UK is focused on delivering profitable returns through a clear and consistent multi-distribution strategy and partnership approach with brokers, affinities, intermediaries and through its own Retail business. The combination of high quality service and low cost delivery remains a strategic priority for the Ageas UK businesses.

During the first six months of 2015 Ageas UK reported a net profit of GBP 29.5 million (6M 2014: GBP 25.3 million) as a result of benign weather in the first quarter of 2015, as well as an improved performance in its Commercial lines business.

Total income, including Tesco Underwriting, was GBP 961.0 million (6M 2014: GBP 1,024.9 million), where Ageas has continued to implement a disciplined approach to pricing against a market where Household and Motor average market premiums continue to be low.

Ageas has around 8 million customers across its businesses in the UK and insures 3.6 million Motor policies. In the first half of 2015, new deals were announced with Virgin Money and Volkswagen Financial Services, demonstrating the trust that significant brands place in Ageas to meet their customers’ needs.

Ageas Insurance’s net result was GBP 30.4 million (6M 2014: GBP 21.8 million) reflecting an improved performance on Household following relatively benign weather in the first quarter. The result also reflects   a continued good performance in Commercial lines business with brokers as a result of the strategic focus in this area.

Commercial and Special Risks inflows saw an increase of 7.3% to GBP 95.4 million (6M 2014: GBP 88.9 million) as a result of the good performance of Special Risks and schemes business. The company’s refreshed focus on growing Commercial lines business is receiving positive feedback from brokers, especially in terms of schemes business where Ageas has a growing reputation for excellence.

Ageas Insurance was assigned an A- with ‘positive outlook’ rating from Standard and Poor’s in May and reaffirmed A+ ‘Strong’ by Fitch in July, further reflecting the company’s strategic importance to Ageas Group.

Tesco Underwriting, the Motor and Household insurance partnership with Tesco Bank, of which 50.1 per cent is owned by Ageas, generated GWP of GBP 199.7 million during the period (6M 2014: GBP 222.8 million). Competitive market conditions led to lower new business and average premiums across both Motor and Household in the first six months.

Within Ageas UK’s Other activities, the Retail business delivered a net profit of GBP 3.6 million (6M 2014: GBP 6.7 million). Total Other business reported a net loss of GBP 4.1 million (6M 2014: profit of GBP 4.9 million) reflecting the benefit from the receipt of a legal settlement in last year’s result, as well as strategic project costs and stable regional headquarter in this year’s result.

As part of Ageas’s Retail strategy to build on its position as the UK’s fourth largest Personal lines intermediary and to respond to the challenges of a competitive market, actions continue to be taken to simplify the business model. Significant progress has been made this year on the migration of all Retail products onto one IT platform.

In the first half of the year, new strategic partnerships have been announced with both Virgin Money and Volkswagen Financial Services (UK) Ltd.

[1] All motor traffic increased by 1.8% in the year ending March 2015 compared to the prior year. Department for Transport, Quarterly Road Traffic Estimates, Great Britain, January – March 2015, Published May 2015