Announcing the full year results for 2014, Andy Watson, Chief Executive of Ageas UK commented:
“In a year where the industry faced a number of challenges, I’m pleased to report that we’ve ended 2014 in good shape. We’ve made strong progress on the integration of our two insurance businesses, giving brokers a greater product choice in both Personal and Commercial lines. We continue to implement our growth and simplification strategy in our Retail business. The additional focus and investment in Partnerships has delivered the renewal and launch of significant deals in 2014, demonstrating that well-respected brands trust Ageas to look after their clients. I’m immensely proud of the continued recognition we receive from the industry and our customers and look forward to building on this in 2015.”

As a result of the implementation of IFRS 10, from 1 January 2014 Ageas no longer consolidates Tesco Underwriting, but reports it as a non-consolidated partnership and therefore does not include the Tesco Underwriting result in the combined ratio. All historic data has been restated accordingly. The management and operation of the partnership remain unchanged.

Ageas UK continues to focus on delivering profitable returns, reflecting a clear and consistent multi-distribution strategy and partnership approach with brokers, affinities, intermediaries and through its own Retail business. The combination of high quality service and low cost delivery remains a strategic priority for all the Ageas UK businesses.

At the end of 2014, Ageas UK reported a net profit of GBP 94.7 million (FY 2013: GBP 85.2 million), with the year on year increase including benefits from a legal settlement in Ageas Retail and the capital gain on the sale of Ageas Protect that more than offset the impact of storms and floods that hit the UK in the first quarter.

Total income including Tesco Underwriting was broadly stable at GBP 2,097.6 million (FY 2013: GBP 2,116.8 million), reflecting a disciplined approach to pricing in a market where average premiums continue to be down, albeit there are signs of a slight upward trend in Motor.

Ageas has around 9 million customers across its businesses in the UK and insures 3.6 million Motor policies. Its continued focus on service delivery and best practice performance was evidenced in a year of significant recognition from partnerships, the industry and its customers. Partnership renewals with Tesco Bank and John Lewis, and a new deal with Virgin Money as part of the company’s bancassurance strategy are testament to the trust that these brands place in Ageas to meet their clients’ expectations.

Repeated achievement of significant awards such as the British Insurance Awards ‘General Insurer of the Year’; Insurance Times Awards ‘Personal Lines Insurer of the Year’ as voted by brokers; and Incisive Media’s ‘Gold Standard for Insurance’ and ‘Gold Standard for Protection’ evidences the strong performance of Ageas, while also managing significant business change. The achievement of the Investors in Customers’ ‘Exceptional’ rating for customer satisfaction demonstrates that the company is getting it right for customers too

Ageas Insurance’s net result was GBP 59.1 million (FY 2013: GBP 69.5 million) reflecting some large losses in Motor and costs linked to the integration of its two insurance businesses. The result also includes a tax credit from previously unrecognised tax losses arising from the acquisition of Groupama Insurance Company Limited in 2012.

Household income was down at GBP 334.8 million (FY 2013: GBP 343.6 million), due to competitive market conditions. Despite the weather impact in the first quarter, Ageas’s average premiums for Household has remained flat, against the background of lower rates in the market.

Commercial and Special Risks inflows saw an increase of 3.0% to GBP 182.4 million (FY 2013: GBP 177.2 million) due to the additional capability of Ageas Insurance and growth in scheme business. Growth is expected to continue with refreshed focus on growing business in Commercial Motor, schemes and e-trading business.

The combined ratio for Ageas Insurance continued to deliver a sub 100% performance and by the end of the year was 99.8% (vs. 97.8% FY 2013). The Motor ratio ended the year at 99.7% (FY 2013: 96.9%) with a higher frequency of accident claims linked to increased traffic volumes1. Benign weather for the remaining three quarters of 2014 contributed to a good performance of the Household ratio at 94.3% (FY 2013: 93.8%). Following ongoing developments to deliver a profitable Commercial book, the total Commercial lines ratio including Commercial Motor also delivered a sub 100% performance at 99.3% (FY 2013: 101.9%).
1 Department for Transport, Quarterly Road Traffic Estimates: Great Britain Quarter 3 2014 – all motor traffic increased by 2.2% to 77.9bn vehicle miles when compared to the same quarter in 2013. This is the highest quarterly total recorded since 2008.

Tesco Underwriting, the Motor and Household insurance partnership with Tesco Bank, of which 50.1 per cent is owned by Ageas, generated GWP of GBP 428.9 million during the period (FY 2013: GBP 443.0 million). Against competitive conditions in Motor, Tesco Underwriting has seen 1.8% volume growth, but continues to maintain firm pricing to improve the book’s risk profile.

The net result of Ageas’s interest in Tesco Underwriting made a loss of GBP 1.8 million (FY 2013: positive GBP 7.0 million) reflecting the market wide weather impact earlier in the year and the continuing pressure of the competitive market in Motor.

Following a five year partnership, which now serves 1.2 million customers, Ageas UK and Tesco Bank signed an agreement at the end of the year to extend the deal.

Ageas Protect’s post tax result was a loss of GBP 2.4 million compared to a loss of GBP 1.8 million for the same period last year due to a Deferred Acquisition Cost (DAC) write off, as a result of historically low yields in the latter part of 2014 influencing the valuation of expected future cash flows.

On 6 August 2014, Ageas announced the sale of Ageas Protect to AIG as part of its strategy to focus on its core non-life business. The transaction was approved by the regulator and completed at the end of 2014 for a total consideration of GBP 197 million.

Ageas Protect was launched in the UK in July 2008 and now has over a 5% market share in the UK protection market.

Within Ageas UK’s Other Insurance activities, the net profit was GBP 39.8 million (FY 2013: GBP 10.5 million) including the proceeds of a legal settlement and the capital gain on the sale of Ageas Protect.

The Retail business delivered a net profit of GBP 12.8 million (FY 2013: GBP 23.3 million), which was aligned with expectations due to the investment being made to grow the business while also responding to competitive market conditions. Total inflows were down 7.0% to GBP 164.7 million (FY 2013: GBP 177.0 million) further reflecting the tough and highly competitive environment.

As part of the new Retail strategy to build on its position as the fourth largest Personal lines intermediary and to respond to the continued challenges of a competitive market, actions have been taken to simplify the business model and build long term growth. The simplification of the retail businesses from seven legal entities into one has completed and investment in pricing, IT, data analytics and marketing capability is progressing well. Growth is already being seen in Kwik Fit Insurance Services as a result of the actions being taken combined with higher new business and renewal volumes.

Over the course of the year Ageas has continued to provide additional focus and investment in its partnerships strategy which has successfully led to the renewal of significant deals and the recent announcement of a new arrangement with Virgin Money. 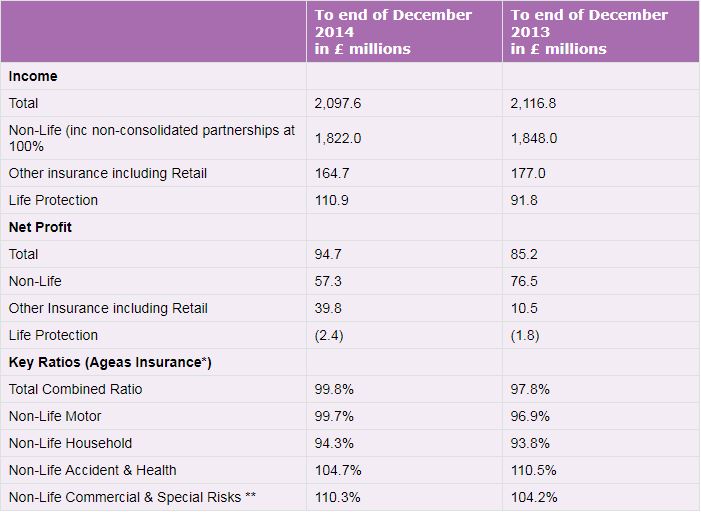