“I’m pleased to report that we’ve delivered another solid quarter’s performance in a challenging market. When you look at our underlying result, we’ve remained stable year on year.

“In terms of Motor performance, we took deliberate pricing action in the first half of the year that’s starting to pay off. This is supported by the much needed upward trend in Motor prices in response to more traffic on our roads and the increase in costs of third party damage claims as a result of more aggressive approaches to non fault claims in the market. The home market remains very competitive with soft rates linked to the continued benign weather conditions.

“Brokers and partners continue to choose Ageas as their preferred partner of choice, evidenced by the recently secured 10 year deal with Age UK, as well as the launch of a new home and motor proposition with Virgin Money. Our focus on new Personal and Commercial schemes continues to bring success, coupled with our longstanding reputation for excellent customer service.”

As a result of the sale of Ageas’s life protection business at the end of 2014, all historic data has been restated accordingly to allow a like for like comparison. During the first nine months of 2014 Ageas Protect reported inflows of GBP 80.9 million and a post tax profit of GBP 1.6 million.

Ageas UK is focussed on delivering profitable returns through a clear and consistent multi-distribution strategy and partnership approach with brokers, affinities, intermediaries and through its own Retail business. The combination of high quality service and low cost delivery remains a strategic priority for the Ageas UK businesses.

In the first nine months of 2015 Ageas UK reported a net profit of GBP 46.9 million (9M 2014: GBP 63.2 million). The 2014 result included a previously reported one off benefit from a legal settlement and the underlying result for the same period was GBP 44.5 million. The stability of this result reflects continued benign weather during 2015, as well as an improved performance in the Commercial lines business.

Total income, including Tesco Underwriting, was GBP 1,483.1 million (9M 2014: GBP 1,544.1 million), reflecting the impact of Ageas’s continued disciplined approach to pricing against a market where Motor premiums are just starting to increase and where Household average market premiums continue to be low.

Ageas Insurance’s net result increased to GBP 46.2 million (9M 2014: GBP 43.9 million) reflecting a better performance on Household. The result also reflects continued good performance in Commercial lines business with brokers as a result of increased focus and clarity of propositions in this area.

Commercial and Special Risks inflows saw an increase of 5.7% to GBP 143.8 million (9M 2014: GBP 136.1 million) as a result of the good performance of Special Risks and stronger new business growth in the last quarter on both Fleet and traded SME accounts. The schemes proposition remains strong as a result of Ageas’s growing reputation for excellence and focus remains on long term sustainable growth.

The combined ratio for Ageas Insurance continued to deliver a sub 100% performance and by the end of the first nine months improved to 98.3% (vs. 99.3% 9M 2014). The Motor ratio remained in line with the first six months but deteriorated year on year to 100.8% (9M 2014: 99.4%) reflecting a higher frequency of accident claims linked to increased traffic volumes[1] combined with continued higher third party damage average costs. The benign weather so far this year has contributed to a good Household ratio performance at 92.1% (9M 2014: 95.1%).

Tesco Underwriting, the Motor and Home insurance partnership with Tesco Bank, of which 50.1 per cent is owned by Ageas, generated GWP of GBP 307.5 million during the period (9M 2014: GBP 335.7 million). Lower new business and average premiums were seen across both Motor and Household as a result of the continued competitive market conditions.

Within Ageas UK’s Other activities, the Retail business delivered a net profit of GBP 6.4 million (9M 2014: GBP 10.6 million). Total Other business reported a net loss of GBP 4.3 million (9M 2014: profit of GBP 20.8 million) reflecting the benefit from the receipt of a legal settlement in last year’s result, as well as strategic costs and stable regional headquarter costs.

Total inflows were GBP 115.9 million (9M 2014: GBP 126.6 million) against the backdrop of a market where competitive Motor and Household market conditions are putting volumes in large Personal lines intermediaries under pressure.

As part of Ageas’s Retail strategy to respond to the challenges of a competitive market, actions continue to be taken to simplify the business model. One of the key deliverables has been a move from six customer systems to one, as well as a move to one telephony platform, which has progressed well. 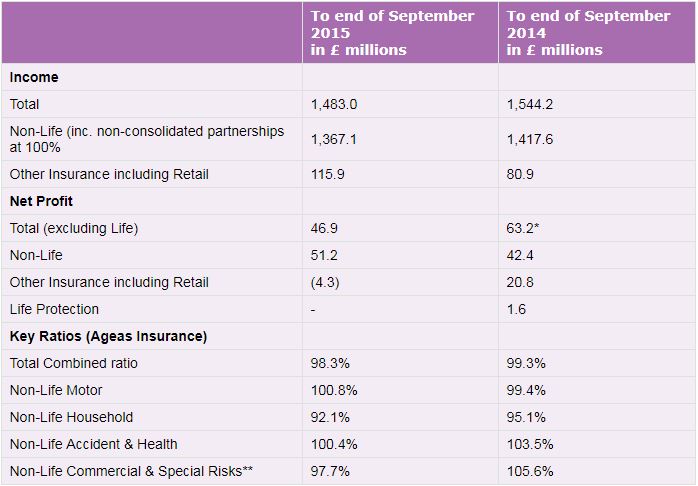 * GBP 44.5m underlying profit in 2014 excluding a one off benefit.
**Commercial and Special Risks includes costs of integration. Commercial lines including Commercial Motor reported a total combined ratio of 84.0% (vs. 96.9% in 2014).