Announcing the nine month results for 2014, Andy Watson, Chief Executive of Ageas UK commented: “I’m pleased to report that we’ve seen a strong third quarter result, continuing our recovery from the impact of the weather earlier in the year and despite lower average premiums in the market. Our ability to turn this around against the current tough market conditions, while maintaining our underwriting discipline and delivering significant changes within our business, show that we remain in good shape.  Significant progress continues on the integration of our two insurance businesses, while we are taking action to improve expenses and build long term growth within our Retail business. Our brokers, partners and customers continue to recognise the high levels of service we provide and I’m very proud that we have now achieved the Investors in Customers ‘Exceptional’ accreditation for customer satisfaction.”

As a result of the implementation of IFRS 10, from 1 January 2014 Ageas no longer consolidates Tesco Underwriting, but reports it as a non-consolidated partnership and therefore does not include the Tesco Underwriting result in the combined ratio. All historic data has been restated accordingly. The management and operation of the partnership remain unchanged.

Ageas UK continues to focus on delivering profitable returns, reflecting a clear and consistent multi-distribution strategy and partnership approach with brokers, affinities, Independent Financial Advisers (IFAs), intermediaries and through its own Retail businesses. The combination of high quality service and low cost delivery remains a key area of focus for all the Ageas UK businesses.

The company reported a net profit of GBP 64.8 million (9M 2013: GBP 73.7 million profit), with the year on year decrease reflecting the impact of storms and floods that hit the UK in the first quarter. Building on the recovery seen in the last quarter, the third quarter delivered another good result at GBP 38.5 million (vs. GBP 24.6 million in Q3 2013).

Total income including Tesco Underwriting was stable at GBP 1,625.1 million (9M 2013: GBP 1,627.2 million). The benefits of our wider insurance proposition to brokers continue to offset the tough trading environment in Retail, and more generally in Motor where average market premiums continue to be down, between 2.5% to 14.4% year-on-year , albeit the downward trend is slowing.

Ageas has around 9 million customers across its businesses in the UK and insures 3.6 million Motor policies, with a 3.9% increase year on year. Ageas’s position in the motor market was further strengthened this quarter with a new five year deal with Aioi Nissay Dowa Insurance Company of Europe Ltd to provide Commercial Vehicle insurance to Toyota and Lexus UK customers, building on the car insurance partnership that launched in 2010.

Continuing its commitment to the broker market, Ageas also recently announced a deal with Bennett’s to provide a new scooter insurance product targeted at 16-19 year olds alongside a number of other deals achieved earlier in the year.

Ageas continues to focus on service delivery and best practice performance as evidenced by another successful quarter in terms of recognition, including the achievement of the Investors in Customers top ‘Exceptional’ rating for customer satisfaction. The insurer was also awarded Bodyshop Magazine ‘Insurance Company of the Year’ for the third consecutive year and fourth year overall, as well as Insurance Fraud Awards’ ‘Fraud Investigation Team of the Year’ and ‘Insurer/Solicitor Collaboration of the Year’ at the Rehabilitation First Awards.

Ageas Insurance’s net result was GBP 43.9 million (9M 2013: GBP 61.0 million) and reflects the impact of the storms in the first quarter.

Household income remained broadly flat at GBP 253.3 million (9M 2013: GBP 254.4 million), supported by growth of niche business as part of Ageas’s new wider product range. Despite the weather impact in the first quarter, Ageas’s average premiums for Household continued to remain flat, against the background of lower rates in the market.

Commercial and Special Risks inflows saw an increase of 5.9% to GBP 136.1 million (9M 2013: GBP 128.5 million) due to the additional capability of Ageas Insurance and growth in scheme business. Growth is expected to continue with refreshed focus on growing business in Commercial Motor, schemes business and e-trading.

Tesco Underwriting, the Motor and Household insurance partnership with Tesco Bank, of which 50.1 per cent is owned by Ageas, generated GWP of GBP 335.7 million during the period (9M 2013: GBP 341.1 million). In a market environment of strong competition in Motor, Tesco Underwriting has seen volume growth, but continues to maintain firm pricing to improve the book’s risk profile.

The net result of Ageas’s interest was negative GBP (1.4) million (9M 2013: positive GBP 4.3 million) reflecting the market wide weather impact earlier in the year and the continuing pressure of the competitive market in Motor.

Ageas Protect’s post tax result was a profit of GBP 1.6 million compared to a loss of GBP (1.5) million for the same period last year as the business continues to grow and build scale.

On 6 August 2014, Ageas announced the sale of Ageas Protect to AIG. The closing of the deal is well on track and remains subject to regulatory approval.

Within Ageas UK’s Other Insurance activities, the net profit was GBP 20.8 million (9M 2013: GBP 9.9 million) including the proceeds of legal settlement.

The Retail companies delivered a net profit of GBP 10.6 million (9M 2013: GBP 19.9 million) impacted by total inflows being down 7.8% to GBP 126.6 million (9M 2013: GBP 137.4 million), reflecting a tough and highly competitive environment leading to lower volumes and margins.  As part of a new Retail strategy to build on its position as the fourth largest Personal lines intermediary and to respond to the continued challenges of a competitive market, actions are now being taken to lower expenses and build long term

Ageas Retail consists of Ageas Retail Limited (managing the RIAS and Castle Cover brands), Kwik Fit Insurance Services and Ageas Insurance Solutions, all of which strengthen Ageas’s overall distribution and manufacturing mix. growth.  As part of this approach, the simplification of the retail businesses from seven legal entities into one remains on track,  with RIAS and Castle Cover now already part of Ageas Retail Limited. The multi-million pound investment programme in pricing, IT, data analytics and marketing capability is progressing well, which includes the addition of 205,000 live policies on the centralised CDL Strata platform offering customers an enhanced proposition. 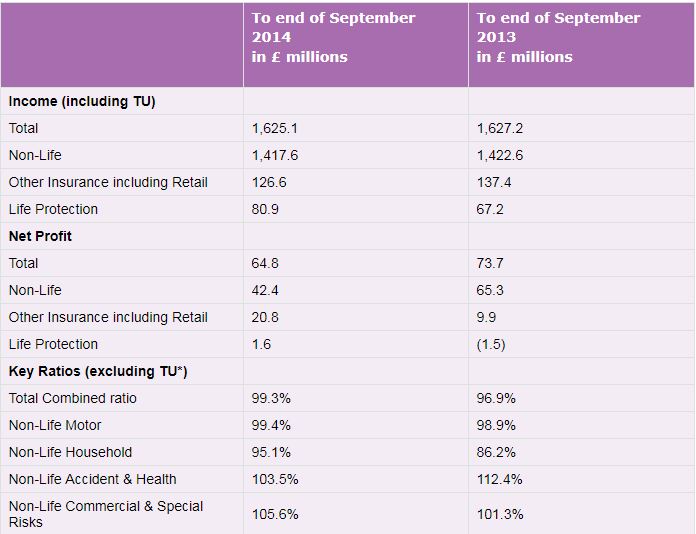