Continued development of the business

“It’s been another good year for Ageas, delivering improvements in our income, profit and combined ratio. The integration of Groupama Insurance Company Limited has gone very well and we’re delighted that brokers are able to take advantage of the wider product choice now available to them, alongside the quality service that they continue to recognise us for. We’ve maintained our underwriting discipline as rates have come under pressure throughout the year and we are in good shape for 2014.”

Ageas UK continues to focus on delivering profitable returns, reflecting a clear and consistent multi-distribution strategy and partnership approach with brokers, affinities, Independent Financial Advisers (IFAs), intermediaries and through its own Retail businesses.  The combination of high quality service and low cost delivery remains a key area of focus for all the Ageas UK businesses.

The company has delivered an increase in underlying net profit, up 2.8% to GBP 85.2 million (FY 2012: GBP 82.9 million).  This reflects a continuing desire to maintain pricing discipline, particularly in Motor; a prudent approach to protecting against volatile weather events, coupled with relatively benign weather conditions for the first nine months of 2013; and the benefit of the Groupama Insurance Company Limited (GICL) acquisition.

Total income was up at GBP 2,116.8 million (FY 2012 GBP 2,011.4 million) with the inclusion of GICL offsetting a tough trading environment in Retail, and more generally in Motor where premiums are reportedly down between 9.5% to 14% year-on-year across the market .

The combined ratio improved to 98.4% (vs. 99.8%) mainly driven by an excellent performance in Household due to the benign weather conditions and a prudent approach to pricing.  The Motor ratio remained stable at 98.5% despite the competitive market conditions.

Ageas now has over 9 million customers in the UK across its businesses and underwrites a record 3.6 million Motor policies. Since acquiring GICL, Ageas is the second largest Motor insurer in the UK.

Ageas’s award-winning track record also continued during the period, being nominated by brokers as the Insurance Times Personal Lines Insurer of the Year for the third year running and continuing to be the only insurer to achieve the Gold Standard for insurance, which was achieved for the sixth consecutive year. It was also the first year that Ageas achieved the Gold Standard for Protection. Over the course of the year, Ageas continued to be recognised for its high levels of service, achieving an ‘outstanding’ rating for Personal Lines service from an Investors in Customers survey of brokers and being awarded the ‘World Class’ Service Mark accreditation for home insurance by the Institute of Customer Service. The company was also voted by brokers as ‘top’ for Personal Lines Underwriting Service in the most recent Insurance Age Sentiments survey.

Net Profit for Ageas Insurance increased by 16.9% to GBP 69.5 million (FY 2012: GBP 59.4 million). This result benefits from the addition of the GICL business, relatively benign weather conditions in the first nine months and was achieved despite a challenging Motor market and some large losses which have impacted the result.

Household income was up 19.4% at GBP 343.6 million (FY 2012 GBP 287.8 million), as a result of continued pricing discipline and the positive impact of Ageas Insurance becoming the sole underwriter for Ageas’s over 50s brands. The Accident & Health account including Travel increased by 55.9% to GBP 70.0 million (FY 2012 GBP 44.9 million). The anticipated reduction in Commercial and Special Risks inflows due to continued focus on profitability was offset by the inclusion of GICL to provide an increase of 2.5% to GBP 177.2 million (FY 2012 GBP 172.8 million). The combined capability of Ageas Insurance and GICL means the company is well placed to grow in its chosen segments.

The acquisition of GICL adds a wider range of expertise and complementary products for the company’s solid broker base, reinforcing the strategy to increase the breadth and depth of products available to clients.  As a result, the Optima and Exclusively range of products continue to be available to brokers alongside Ageas’s existing products.  The legal integration of GICL completed in October 2013.

Tesco Underwriting, the Motor and Household insurance partnership with Tesco Bank, of which 50.1 per cent is owned by Ageas, generated GWP of GBP 443.0 million during the period (FY 2012: GBP 589.7 million). In a market environment of strong competition in Motor, Tesco Underwriting is focusing both on maintaining firm pricing discipline through the underwriting cycle and on its Clubcard customers, improving the book’s risk profile.

Ageas Protect continued to grow with total GWP inflow increasing by 32.3% to GBP 91.8 million (FY 2012 GBP 69.4 million), although New Annual Premiums decreased by 16.6% to GBP 30.1m (FY 2012 GBP 36.1 million) reflecting a continued subdued market in individual protection. The company now protects around 305,500 lives, an increase of 15% over the same period in 2012.  Growth has been heavily driven by the company’s award-winning approach to underwriting and technology, high levels of service and product innovation. As part of its commitment to offer compelling products to intermediaries, the business launched several products throughout the year including Personal Life of Another through its existing YourLife Plan and Low Start products; a new Business Protection product range; and an enhanced critical illness product, giving customers real added value and peace of mind.

Ageas Protect’s post tax result of GBP (1.8) million compared to GBP (0.1) million for the same period last year and was in line with expectations, recognising the additional costs of financing the continued growth of the business.

Overall, total inflows for Other Insurance activities were down 13.2% to GBP 177.0 million (FY 2012: GBP 203.9 million) reflecting a tough and highly competitive environment.  The net profit decreased to GBP 10.5 million (FY 2012: GBP 12.7 million). In light of the competitive market, actions have been taken, within the Retail companies, to reduce expenses by 9.9% compared to same period last year.

Within Ageas UK’s Other Insurance activities, the Retail companies delivered a net profit of GBP 23.3 million (FY 2012: GBP 22.7 million). Ageas Retail consists of RIAS, Castle Cover, Kwik Fit Financial Services and Ageas Insurance Solutions, all of which strengthen Ageas’s overall distribution and manufacturing mix. Ageas Retail has over 2.5 million customers. Ageas Retail’s over 50 brands, RIAS and Castle Cover, have delivered an additional GBP 42.1 million in premium to Ageas Insurance since it became the sole underwriter in August 2013 compared to the prior year, strengthening Ageas’s position in this key growing market. 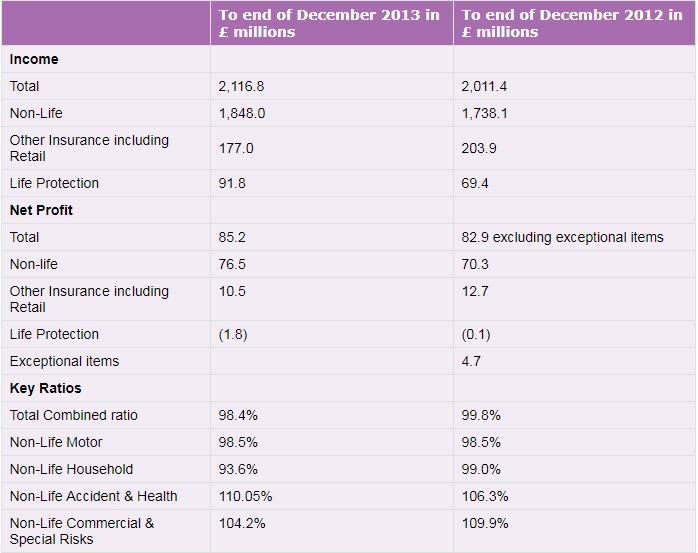