Announcing the first three month results for 2014, Andy Watson, Chief Executive of Ageas UK commented: “It’s been a challenging first quarter for the industry as we continue to manage the claims resulting from the wettest winter since records began. The severe storms and floods have impacted negatively on profit, but our focus remains on helping affected customers in their time of need with our award-winning service. We continue to see growth in our insurance income across all lines as a result of brokers taking advantage of the extended product choice now available to them, as well as maintaining our underwriting discipline against the backdrop of continued rate decreases in the market.”

As a result of the implementation of IFRS 10, Ageas will no longer consolidate Tesco Underwriting, but will report it as a non-consolidated partnership from the first quarter of 2014 and therefore will not include the Tesco Underwriting result in the combined ratio. All historic data has been restated accordingly. The management and operation of the partnership remain unchanged.

Ageas UK continues to focus on delivering profitable returns, reflecting a clear and consistent multi-distribution strategy and partnership approach with brokers, affinities, Independent Financial Advisers (IFAs), intermediaries and through its own Retail businesses.  The combination of high quality service and low cost delivery remains a key area of focus for all the Ageas UK businesses.

The company reported a net loss of GBP (4.6) million (3M 2013: GBP 19.4 million profit) reflecting the impact of storms and floods that hit the UK in the first quarter. Excluding the impact of the weather events in January and February 2014, profit improved to GBP 24.6 million as a result of its continued focus on writing profitable business.

Total income including Tesco Underwriting rose to GBP 526.7 million (3M 2013: GBP 511.3 million) with the benefits of our wider insurance proposition to brokers offsetting a tough trading environment in Retail, and more generally in Motor where average market premiums are reportedly down between 5.5% to 19.1% year-on-year .

The combined ratio for Ageas Insurance deteriorated to 106.1% (vs. 98.6%) largely driven by adverse weather affecting the Household and Commercial lines result.  The Motor ratio deteriorated from 99.6% to 101.6% due to a small number of large losses, as well as the impact of the weather events.

Ageas has over 9 million customers across its businesses in the UK, insuring 3.6 million Motor policies, making it the second largest UK Motor insurer . Its commitment to the broker market was further enhanced in the first quarter with the announcement of a five year extension to its partnership with Broker Network, providing exclusive products and schemes to its members. In addition, further strengthening its approach to affinity partnerships, the business also announced a broader partnership with Vauxhall, one of the UK’s largest motor manufacturers, to encompass the provision of van insurance, as well as private Motor insurance.

Ageas’s award-winning track record continued during the period, being voted by brokers as ‘top’ for Personal Lines underwriting service in the most recent Insurance Age Sentiments survey (May 2014). The company’s commitment to service excellence was also recognised at the recent Insurance Times Claims Excellence Awards where Ageas achieved Training Initiative of the Year, Claims Initiative of the Year and Outstanding Personal Lines Claims Team of the Year. The results of the company’s short listing in a number of categories at the Post Claims Awards and British Insurance Awards will be announced in the next quarter.

Ageas Insurance’s net result was GBP (4.0) million (3M 2013: positive GBP 15.5 million). This includes GBP 25.9 million impact of storms and floods in the first three months and is in line with its market share.

Household income was up 3.7% at GBP 87.0 million (3M 2013: GBP 83.9 million), as a result of the positive impact of Ageas Insurance becoming the sole underwriter for Ageas’s over 50’s brands and the growth of niche business as part of Ageas’s new wider product range. Despite the weather impact in the first quarter, average premiums for Household remained flat, while average premiums across the market were down.

Commercial and Special Risks inflows saw an increase of 11.9% to GBP 41.2 million (3M 2013: GBP 36.8 million) due to the additional capability of Ageas Insurance following the integration of Groupama Insurance Company Limited and growth in scheme business. Growth is expected to continue with additional scheme business announced in the first quarter including an extended strategic partnership with Darwin Clayton, one of the longest established independent insurance brokers in the UK, to provide a long-term arrangement for a multi-million pound cleaning and facilities management insurance scheme.

Tesco Underwriting, the Motor and Household insurance partnership with Tesco Bank, of which 50.1 per cent is owned by Ageas, generated GWP of GBP 108.9 million during the period (3M 2013: GBP 99.7 million). In a market environment of strong competition in Motor, Tesco Underwriting is focusing both on maintaining firm pricing discipline through the underwriting cycle and on its Clubcard customers, improving the book’s risk profile.

The net result, after minority interests, was negative GBP (4.2) million (3M 2013: positive GBP 1.3 million) reflecting the impact of the weather.

Total GWP inflow increased by 20.8% to GBP 25.7 million (3M 2013: GBP 21.2 million) driven by the company’s award-winning approach to underwriting and technology, high levels of service and product innovation.  New Annual Premiums decreased by 5% to GBP 8.1 million (3M 2013: GBP 8.5 million), but excluding the gender pricing, which distorts the prior year result, the new premiums grew 2.5%. As part of its commitment to offer compelling products to intermediaries, the business launched Relevant Life Cover in the first quarter, an extension to its growing business protection solutions and overall breadth of products.

Ageas Protect’s post tax result was near breakeven at GBP (0.1) million compared to GBP (0.4) million for the same period last year and reflects a more efficient use of capital as a result of putting in place an external financing arrangement in 2013.

Within Ageas UK’s Other Insurance activities, the net profit increased to GBP 3.7 million (3M 2013: GBP 3.0 million) including the proceeds of a legal settlement.

The Retail companies delivered a net profit of GBP 2.1 million (3M 2013: GBP 6.3 million), while total inflows were down 12.4% to GBP 41.8 million (3M 2013: GBP 47.8 million) reflecting a tough and highly competitive environment.  In order to face the continued challenges of a competitive market within Retail, actions are continuing to build long term growth including a multi-million pound investment programme in pricing, data analytics and marketing capability. 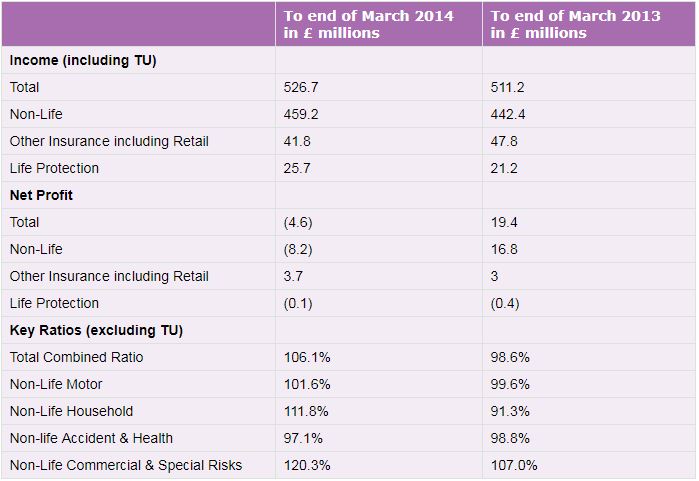 ii Based on volume. AM Best and internal analysis of FSA Returns 2012.