"It's been another good year for Ageas UK, delivering our highest ever profit and reaching the £2 billion income milestone. Our continued strategy of offering a wider range of products through our brokers, partners, Independent Financial Advisers and clients continues to pay off and the recent Groupama Insurances acquisition builds on that strength. It is an excellent platform as we take the business forward and a lot of credit must go to my predecessor Barry Smith for that. While the market is not without its challenges our breadth of distribution, strong partnerships and reputation for service excellence gives us confidence that we will continue to build momentum during 2013."

Ageas UK continues to deliver profit, growth and improving performance, reflecting a clear and
consistent multi-distribution strategy and partnership approach with brokers, affinities, Independent Financial Advisers (IFAs), intermediaries and through our own Retail businesses. The combination of high quality service and low cost delivery remains a key area of focus for all the Ageas UK businesses.

The company has delivered its highest year-end profit on total income of GBP 2,011.4 million, with overall net profit, post minorities, increasing by 11.0% to GBP 82.9 million on an underlying basis (GBP 74.7 million FY 2011).

Ageas UK also completed the acquisition of Groupama Insurance Company Limited in November 2012. The deal adds a wider range of expertise and complementary products for the company's strong broker base, reinforcing the strategy to grow the Non-Life business by increasing the breadth and depth of products available to clients.

Ageas Insurance's focus has continued to be on expanding profitable business, particularly in Motor (Private Car and Commercial Vehicle) and taking pre-emptive actions to protect its results in other areas such as Household. This has led to an increase in profitability.

Ageas Insurance has continued its consistent approach of pricing its Motor business to reflect the underlying risk, using increased data sources and continuing its strong focus on fraud detection. These actions have led to positive results and a Motor combined ratio which has improved to 95.0% (FY 2011 95.4%). By way of comparison, research from Deloitte has shown that the industry average Motor combined ratio at the end of 2011 was 106.1%.1
Net Profit for Ageas Insurance on an underlying basis was GBP 56.3 million, an increase of 13.6% on the same period last year (FY 2011: GBP 49.5 million) and a record result for the business.

Tesco Underwriting, the Motor and Household insurance partnership with Tesco Bank, of which 50.1 per cent is owned by Ageas, generated GWP of GBP 589.7 million during the period (GBP 655.3 million FY 2011), thanks to a focus on more profitable business. Net Profit, after minority interests, increased to GBP 10.8 million (FY 2011: GBP 3.0 million).

This on going growth reflects the successful roll out of the company's Protection proposition to an increasing number of IFAs, as well as its innovative G-Day promise linked to the EU Gender Directive allowing gender specific rates to be available until 20 December, 2012. The business now protects over 265,000 lives, an increase of 75,000 over the same period last year. Growth in the Protection business has been heavily driven by its award-winning approach to underwriting and technology, high levels of service and product innovation.

The business had a post tax result of GBP (0.1) million compared to GBP (3.8) million for the same period last year.

Ageas UK's Other Insurance activities, which principally comprise the Retail companies, delivered income 4.5% below last year in a tough and highly competitive environment. Ageas Retail consists of RIAS, Kwik Fit Financial Services (KFFS), Ageas Insurance Solutions (AIS) and Castle Cover, all of which strengthen Ageas's overall distribution and manufacturing mix. Total inflows were GBP 203.9 million (FY 2011: 213.6 million) and net profit for the Retail businesses was GBP 22.7 million (FY 2011: 29.4 million), a resilient performance given the challenging trading conditions and including GBP 2.3 million of costs relating to the consolidation of Kwik Fit's activities into its Glasgow site. Total net profit for the Other Insurance activities on an underlying basis was GBP 12.7 million (FY 2011: GBP 25.9 million), with last year's result including an incentive payment of GBP 7.5 million from a partner.

With the inclusion of Groupama Insurances in the Non-life results as of 14 November, there was a positive result of GBP 50.9 million, arising from the excess fair value over the purchase consideration. Exceptional costs relating to the transaction and subsequent reorganisation costs total £14.2m. In addition, goodwill impairment has been recognised in the Retail operations together with amortisation of intangible assets totalling £32.0m. 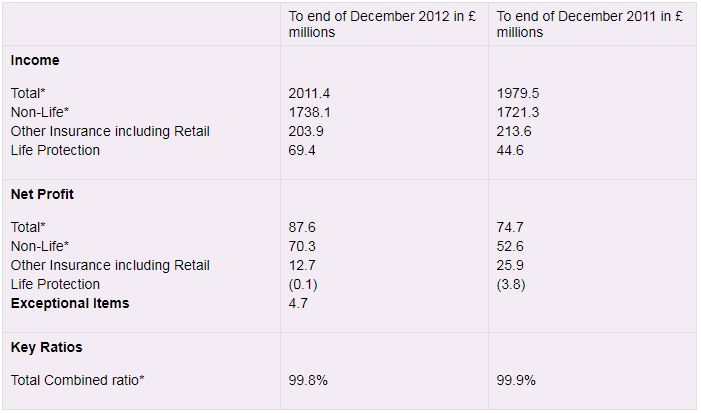